When I started writing this latest book, The Shepherds of Donalds Park, I knew who two of my main characters were going to be.  They were going to be based on my own adorable and hilarious Australian shepherds. That made my job a little easier. I mean I had the prototypes sitting beside me, right? 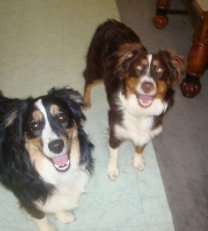 You would think so, but the funniest part of having people read the story  has been that the beta readers believe I write using made-up words.  I do not claim to have invented these words, I am blaming my grandmother, Mama Kate. I know I heard her tell me, “Don’t make a cake of yourself.” Yet, every beta readers so far questioned this term. After much Googling with no success, I might add,  I have removed it and decided, this was a make-believe term for acting foolish. Now I just call the silly dog, foolish. Making a cake of herself actually made me laugh more, but I am rather easy to start snickering at odd sayings.

This one phrase made me question some of the more adorable colorful words and phrases my grandmother said. I am now wondering if an A-Ankle is really a rear end.  She always said, “Be careful you are going to fall and bust your a-ankle.”

This makes me wonder if she made them up or if my Great grandmother Mama McConnell, was  in fact, the initiator of these odd terms.  I never saw my 103-year-old great-grandmother as comedic. Well, not as comedic as my grandmother. I want  to defend her little MamaKateisms, yet, in a majority rules frame of mind, I will remove the sayings and replace them with time-honored euphemisms.

Do you know any odd little sayings that Google has never heard of? I obviously will try to sneak them in if my Beta readers will allow. Let me know in comments.

22 thoughts on “Funny Moments from the Beta Reading Process”