My imagination (and later, theatre specifically) saved my life. When I was a child, my mother was quite ill and consequently to show respect to her, I controlled my emotions. so I didn’t want compound her stress.

I was the youngest in my family. With ten years between me and my next closest sibling, I rarely had anyone to play with or talk to. I depended upon my imagination to comfort me and take me away from loneliness I felt but wouldn’t admit to anyone. I learned how to slap on a smile and pretend everything was good with me.  I was quite a little actress.

When I saw movies, I would act them out and sing very dramatically while sequestering myself upstairs on the east porch of our house. It had no heat and I remember freezing to death for my “art”.

My father was a physician and my mother was raised in Japan when she was a child. Consequently, her wander lust was difficult to satiate and we traveled to many countries when I was quite young.

If it wasn’t hard enough being the youngest, my world view was very different from my fellow classmates. Just another thing to make me an oddity, at least in my mind.

My mother wasn’t at all supportive of my interest in theatre. She intimated I could end up like Elizabeth Taylor, “She’s been married seven times. Look at her…”Something was mentioned about me ending up on a “casting couch.” I didn’t know what that was, but by my mother’s attitude, I knew it must be bad.

Trying to be the good daughter,  I left behind my imagination and became a cheerleader in junior high school. It makes sense if you think about it. That worked for two years and I loved the performing aspect of it.  I was a rotten jumper.  No one taught me how to do a round off or cartwheel, so I taught myself.  But I could yell loudly and lead the crowd in cheers.  At least I could do that!

When I was in high school, I found exactly what I was seeking –the stage! I was cast in my first play as Madame Arcati in “Blithe Spirit”.  Since I had no previous acting experience, but lots experience playing the piano, I notated my script as if I was playing the piano. I used fermatas for pauses and crescendo and decrescendo signs when I wanted to speak louder or softer.

To this day, I grow nostalgic whenever I step backstage. The scent of sawdust, newly painted flats and the warmth of the stage lights are a magical elixir to me. I brush the back of my hand across a velvet grand curtain and immediately I feel I’m home. 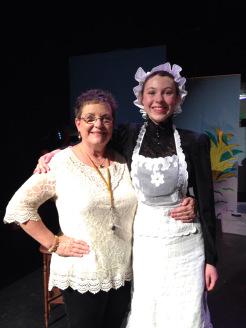 In college, I experienced an epiphany. It was the early 1970’s, and society impressed upon me to hide my negative feelings or only express those feelings most accepted by others. I realized by sharing myself hiding behind a character, I could express all my feelings and thoughts. I felt accepted universally.

That’s a heady experience which made me come back for more. Nearly forty years later, I’m happily stuck here. 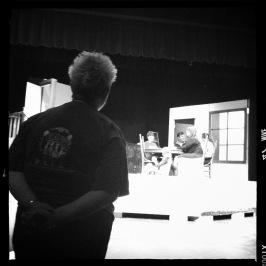 I became a director for a community theatre production of The Miracle Worker because there was no one else willing to do the job. Ha! I have a leader type personality and directing fit into my life.
I was quite young to take on such a challenging production but I took to it right away. I saw the potential of affecting people through stories that I created in my own manner.

Now, I adore making a statement through words and actions.

As of this writing, I have directed over 250 plays and musicals with adults and children alike.  I chose to direct and act at the community level for most of my career.  It’s not that I don’t enjoy professional theatre.  On the contrary. I’ve appreciated the professional positions in which I have been employed.

It’s just not where my life’s journey has taken me.  I’m always open to work in whatever venue needs me.

I’ve portrayed many beloved roles–Maria in “The Sound of Music”, Marion Paroo in “Music Man”,  Dot in “Cricket on the Hearth”, Penny in “You Can’t Take it With You” and many others. Above all, more than any particular role or any special production, I have learned about myself.

Theatre saved my life.  It has given me great joy, creative challenges and great friendships (I even met my husband while acting in a show).

I don’t know where I would be without it.

Deborah is an award winning author, teacher and director.  Recently retired, she taught drama to elementary through high school students for thirty-eight years.  Among many other theatrical experiences, she has directed over 250 plays and musicals with adults and children alike.  Recently, she and her husband of thirty-four years moved from the Colorado Rockies to Kansas to be grandparents to their first grandchild.  When Deborah isn’t writing, reading or cooking she enjoys seeing movies and traveling.  Lastly, she serves as hand maiden to her two quirky cats who really run the show.

4 thoughts on “Guest Post: How Theatre Saved My Life, by Deborah Baldwin”