Have you ever woken up and decided to start a new project? To begin a new book or a collection of short stories was on my mind today.  But I had a birthday party to attend, a house to clean after a hamster minded child spent the night and no clue of where to start.

The day pushed on, clothes got washed and dried, a party was attended, jokes were told, laughter was had and cupcakes were devoured. Not one word came to mind. No little nagging picture came into my thoughts.

Most of Dolcey’s costumes are animals, yet no animal pecked at me, nudged me, or made a sound of any type. I have been awake and active for sixteen hours and not one idea has popped into my head. Other than the words Zak and yak.

Zak and yak, useless!  I began researching yak and I come up with a bison, pretty large animal for one tiny fairy to become. But didn’t she become an elephant you may ask?  Why yes she did. A small elephant with a funny trunk was featured in When a Pachyderm Comes to Visit.

So perhaps I have been blocking the thoughts and ideas that crept in,. I was being too hard on the little glimpses of characters that peeped out from behind my eyes.

Sixteen hours later, its time for my sleeping pill and now I get the inspiration to write, just a blog post, sure, but it is a beginning. Now begs the questions, do I take my little low dose sleeping pill that keeps me on schedule?  Shall I sit up into the night writing?  One way or another I have stayed up long enough to post one more blog post. 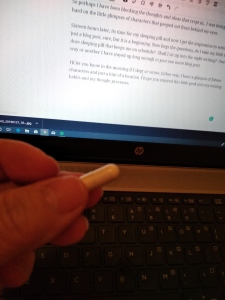 I’ll let you know in the morning if I slept or wrote. Either way, I have a glimpse of future characters and just a hint of a location. I hope you enjoyed this little peek into my writing habits and my thought processes.