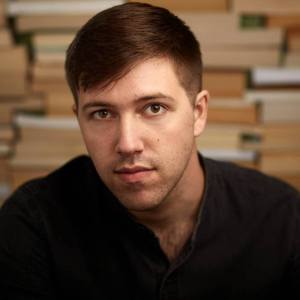 Jake Urry is a British narrator and actor that I luckily stumbled across right as I began to enjoy suspense and mysteries. In fact, he was one of the reasons I gave thrillers a chance. I had gone all this time believing that thrillers were like horror stories and that honestly is a little too gory for me. However, I saw Jake on Twitter and he offered to share an audiobook for new listeners. I love to review new things so I was intrigued. I had only done a handful of audiobooks and they were all romances. After listening to the John Nicholl’s White is the Coldest Colour, I was hooked. I raced around trying to find out about this amazing voice. I located an online interview with Jake so I knew that he has a history of live theater and co-founded and performs in his own company. He, with his talent for voices, is perfect for the audiobook industry. I believe his face is perfect for the stage, so he is one complete package of talent and skill.

END_OF_DOCUMENT_TOKEN_TO_BE_REPLACED

Portraits of the Dead by John Nicholl

I have come to expect severe psychological depravity when I read John Nicholl’s books. This book did not disappoint in that aspect. The evil kidnapper has taken and killed at least five other women before he took Emma. Emma is held in a darkened area without knowing day from night, hours from days and days from weeks. He insisted on servitude from her while he tortured her and taunted her. It was chilling and sickeningly fascinating. John Nicholl has a history of working as a social worker and uses the terror he faced in that career in his own stories.

While Detective Inspector Gravel searched for Emma not knowing if she was alive or dead. Reaching out to the serial Killer while looking for few clues. With trusting people listening to vague and erroneous clues, the police struggle to find this serial killer.

This book is intense. It is just so cold and creepy. I read it on Halloween and was then a little nervous about being out and about at night with the little trick or treaters. It was just that good.

It is truly chilling listening to Jake Urry in his concise and gravelly voice. It takes the story to a new level when Mr. Urry narrates a thriller such as this. He does an amazing job with the voices of women, older adults, young women. His range is amazing. I am really impressed with the narration.

If you are a fan of thrillers, this one is a great one to read and delve into the mind of a psychopath. The telling is sinfully delicious and the story is well plotted and full of misdirection. It helps that you come to know about the serial killer one revelation at a time. I am such a fan of John Nicholl and Jake Urry. When they work together it is a masterpiece.

Where to Find, Portraits of the Dead:

The audiobook, paperback and Kindle formats are available at your favorite retailers and by clickign the links below.

Portraits of the Dead by John Nicholl

END_OF_DOCUMENT_TOKEN_TO_BE_REPLACED

White Is the Coldest Colour by John Nicholl
My rating: 5 of 5 stars

Oh my word. What a terribly gripping and harrowing book. The subject of this psychological thriller is of course abhorrent, but the telling and the wording is perfection. The depravity of the criminal mind comes through and makes you appreciate the hard work of the police. I had total appreciation of the accusers and witnesses that came forward even with the danger, threats, and horror that they had to acknowledge. The little victims with the strength to speak out about what had been perpetrated against them was so touching.

John Nicholl has worked in the past as a police officer and as a Child Protective Social Service officer. Dealing with real life victims of the same horrible type of criminals. John Nicholl writes this work of fiction that pulls the truths from the emotions and the horror that children faced in their real lives. The writing of this story was riveting. I could not even sleep, I was so invested in the story.

The horror of the mind of the abuser was so dirty and ugly. I did not even want him to be called crazy, that seemed like too pat an excuse. I wanted him to suffer as much as he caused suffering. Dr David Galbraith, the calculating, evil predator. Oh he is exceedingly evil. When he was planning, I was physically shaking in shocked and with sickened emotion. He was cold and horrible and so calculating. He manipulated both the future victims and the parents as well. He worked the parents to make it seem safe to be alone with their child all the while he was intending to do great harm. It makes you distrust those that we should trust.

The Police and astute social workers are the saviors of these children. They were equally sickened by the deviousness of this man and people like him. They took hold of this investigation like a bulldog and refused to let go until they solved the case. They were disgusted by the events that were taking place in their small town. They were also disgusted by the people that were in on this with the Doctor. This is one book that should be read, it is hard and grim, but it is a strong story that needs to be told.

In order to appreciate the narration of Jake Urry, you only have to listen for about five minutes. Once you have listened for that first few minutes you appreciate that his voice is just perfect for the story. The cadence and the sound of his voice just bring the finishing touches on the story. He has such a variety of voices in his arsonal. Perfect voices for the police, the families, and the wounded children. The narration was emotionally charged and perfectly executed. I felt I was a part of the entire story as it unfolded before me.

The Story was 5 Stars and the narration was 5 stars. Everything about this book was 5 stars. There is a sequel to this book that I want to read, When Evil Calls Your Name (Dr David Galbraith #2). It is out now and available on Amazon and I will be reading it soon or I might listen to that second book on audiobook. It is currently available on Audible too. If it is as well written as this book is, then it will be another thrilling, spine chilling book.

White is the Coldest Colour is available in paperback, through KindleUnlimited and through Audible as an Audiobook. The book is available at most bookstores and on Amazon