If anyone mentions Kelly, Kentucky, you might shake your head and say, “I got nothing.” But for me, August 21, 2017, became a moment of spiritual connection with the universe, a moment with history, and a memory with my daughter and granddaughter I would not trade for anything.

Leaving home Sunday afternoon for the 3 hour trip to South Western Kentucky to camp out under the stars before attending the spot for 100% totality for the solar eclipse that made the United States gather together in friendship with no negative thoughts and no political agenda. The three-hour trip was nice and went by at a quick pace. Only a few stops for gasoline, drinks and a potty break, meant we were right on time. While driving toward the house we were camping outside of, we noticed a few interesting features near the corn and tobacco fields. There is a “Share the Road” sign, but it is the most adorable sign I have ever seen.

After the mooing cow, howling coyote, and hooting owl quieted down we all grabbed some sleep. A very early morning wake up call by the most cheerful bird ever, meant I had a little time on my hands for my morning relaxation, meditation, and quiet. To me, meditation is scrolling through mail reading blogs. I never learned that “clear your mind” technique.

By nine o’clock everyone was ready to go to the park and attend the Little Green Man Festival.

After leaving the camp site, we ran across some of the “Natural monuments and visitors” in place for the event.  Just a few blocks from the mooing midnight insomniac cow and hooting owl, the festival was laid out for human and canine entertainment.

Once we arrived at the park,  we began to see the familiar theme that celebrates the local history of the Kelly Kentucky Invasion.  An event that occurred on, August 21, 1955, and has been told and retold throughout the years.  There is a book written by the Taylor Family. Plus several episodes on Discovery channel and other space questioning networks.  The Taylor family members claimed to have encountered at least one and as many as fifteen little silverish men with a green glow and yellow eyes.

Games filled the square such as the hamster ball where children and adults alike were climbing inside and attempting to spin an air filled ball. Bobbing on top of the pool over the water like a hamster wheel. Fun areas of bouncy houses for the kids and even the popular harnessed bungee jumping opportunity, everyone was eating, playing, and laughing as we waited for the designated time. 11:56 AM was when the very first bite was taken out of the top right corner of the Sun by our own small Moon.

Everyone began to claim a chair under the tents so that they could fight off a little of the 93-degree day. With bottles of water and the scent of sunscreen, we crept out of the edges of the tent to see how the moon was progressing. On and on it moved as the children grabbed a quick last ride and one last bounce. 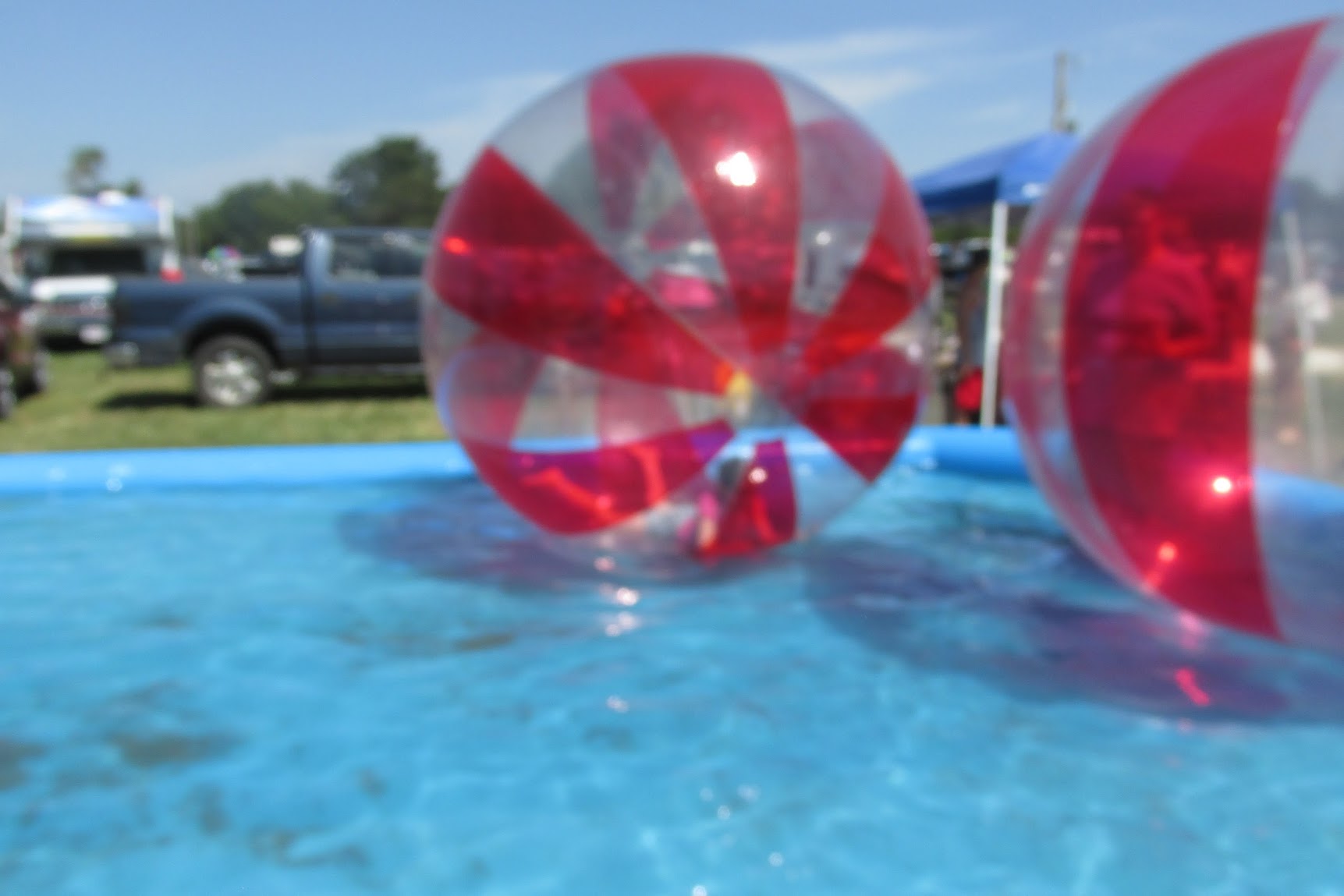 When the countdown began that we were five minutes from the totality, every person grabbed a spot on the grass, looking up, eclipse glasses perched on the nose.  One man wore a welders helmet, I only felt bad for him as he had to be burning up.

Then the magic moment happened. The Moon slipped in front of the Sun and there for one brief breathtaking moment, the diamond ring appeared then utter beauty. A black circle with a dancing halo surrounding it. A burning ball of gas we could safely admire for the next two minutes.

At that time glasses came off and stunned people spun round and round looking at everything at once.  The two planets winking in the sky reminding us that they hide there during the daylight hours all the time, just one brief blink away.

Clapping that had begun at the sight of the diamond ring was abruptly silenced. It was completely silent. No one spoke. Children gripped their eclipse glasses which they had until a moment before been so afraid to look without, in order not to be permanently blinded by a careless glance.

Children laid back on the ground as photos were taken of the complete 380-degree sunset colored horizon.  This was why it was so important to make that trip. This is the thing, you didn’t expect to see.  The air was now almost ten degrees cooler. It felt good, damp hair began to cool in the breeze and for two minutes and forty seconds everyone had a look of awe on their faces, big burly men, dainty women, cool teenagers in designer clothes, and cosplay girls, all stood together feeling the tranquility of the moment.

Then a wink, a blink, and the command, “Put on your glasses, now!”

Twilight began to move off as the afternoon sun began to once again heat the earth with that eons old promise to shine and protect us and give us a habitable environment to call home.  Yes, the moon was still creeping across the front of that glowing orb, but the magic still enveloped us. We all felt connected. We all shared that moment. It was magical.

The minutes had ticked by and we were now ready to move back into the real world. The world of massive traffic jams, five miles an hour treks home. the magic was disbursing.  But there was still a hint of joy. A total stranger won an Eclipse car and we all cheered like he was our baby brother winning. There was still a newness to the event. We had shared a moment. For that two minutes and forty seconds, we were all changed.

Now we needed to return to our lives at home. The schools would be back in session, the boss would expect us to clock in, the hurried drivers would cut off each other and grumble about the traffic. But one thing remained when we all got off on various exits, we stood in line, for the restrooms, the counter to order dinner, or a tall bottle of water to cool off from the heated day, we stood in a line, spoke of what we had seen, and laughed. We smiled, we shared and we felt a kinsmanship with the other 3 million people that were packed onto a two lane parkway heading Nort South East and West.  We all were heading home separately, after one awe inspiring day together.

When I said we laughed, I meant it. We laughed when Angie found the line between EST and CST on the Parkway in Kentucky.  My daughter is a comedian. We laughed for miles.

What did you see? Where did you go? How did you find humanity? Share with me, I truly am interested!